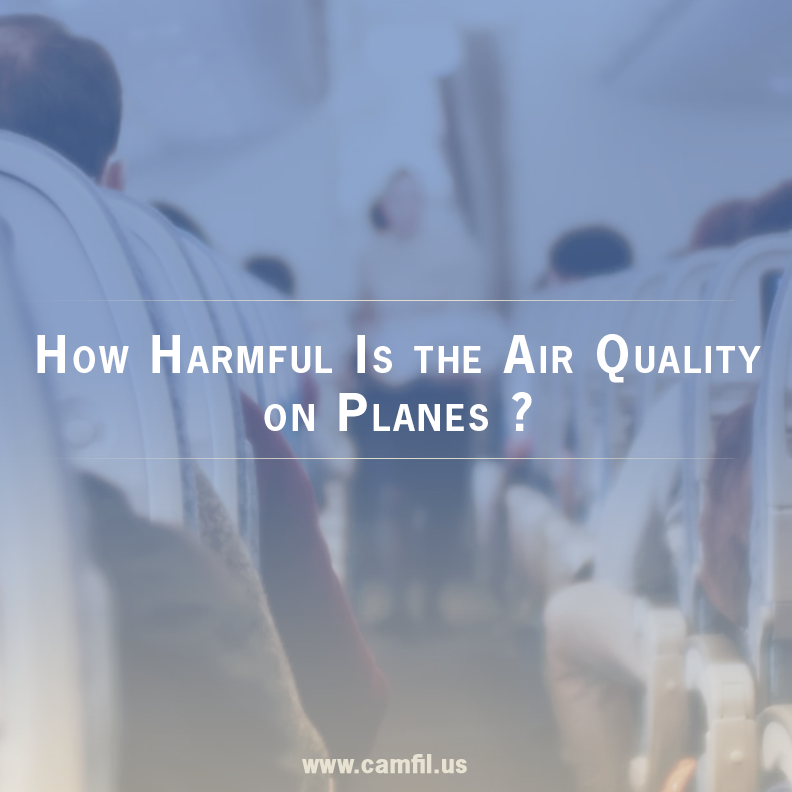 How Harmful Is the Air Quality on Planes?

Learn about the quality of air you may be breathing on your next flight.

Although we tend to focus a lot on the outdoor pollution that is plaguing many major cities throughout the world, indoor air quality is also a big problem, and that includes the air you breathe when you fly on an airplane. Air quality on planes can affect your health in ways that you may not even realize.

“The problem with air quality on planes is that you are really talking about incubating pollutants that are generated inside the cabin,” stated Kevin Wood, Camfil USA Vice President Sales & Marketing. “And without an air filtration system, passengers can inhale or swallow these pollutants, which are capable of worsening respiratory problems such as asthma. So, it’s important for airline passengers to understand what determines the quality of air inside an airplane.”

According to the Centers for Disease Control and Prevention (CDC) article, potential cabin air hazards include: (1)

And according to a piece published on the Association of Flight Attendants website, (2) there are other sources of airplane cabin pollution, including ‘bio effluents,” which enter the air when you exhale:

“….your breath contains all kinds of gases and vapors, such as carbon dioxide, ethanol and aldehydes…[and] water droplets in your breath or in a sneeze or cough can transport bacteria or viruses into the air. Meanwhile, you are busy shedding skin particles that can also serve to transport bacteria and viruses, and your digestive system is busy generating gases.”

And here’s something you probably didn’t know.

Although there are engineering standards that recommend levels of air filtration for airplanes there is no federal requirement for airplanes to install air filters, so that means that the air in many cabins may not be filtered or cleaned in any way, exposing you to harmful particulates.

The issue of air quality on planes became a big issue recently when four flight attendants filed a lawsuit against Boeing, accusing the aircraft giant of negligence regarding the presence of toxic fumes inside an aircraft’s cabin.

Per an article in USA Today, (3) the four flight attendants were all working an Alaska Airlines flight that was forced to make an emergency landing after toxic fumes escaped into the cabin.

When the plane landed, all four flight attendants were rushed to a hospital, and two of them lost consciousness while the plane was still in flight.

The four filed suit against Boeing – a supplier of planes for Alaska Airlines – for “exposing them and the plane’s passengers to toxic fumes that seep into the plane’s ventilation system.”

As the article explained, the majority of airplanes receive ventilation through outside air that circulates through the aircraft’s engines into the cabin. This is known as the “bleed air system,” and is used in a wide variety of aircraft to generate clean air inside a cabin.

But if something goes awry, such as a broken seal inside an engine, then oil can contaminate the air that flows into the cabin.

The flight attendant’s lawsuit accuses Boeing of being aware of the issue since the 1950s, but not doing anything to fix the problem.

What’s more concerning, however, is that the bleed air system can create contaminated air in a cabin without black smoke blowing into the cabin, which means passengers can easily inhale toxic air and not be aware of it.

That’s the reason that part of the lawsuit asked for Boeing to install air quality sensors to alert pilots that bad air is circulating throughout the cabin.

And according to an article in Gizmodo, (4) bad air quality on planes can cause symptoms such as “…irritation to the eyes, nose and throat, headaches, light-headedness and dizziness, fatigue, weakness, generally feeling unwell, confusion and difficulties in concentration.”

The challenge for health care experts trying to make the case that air quality on planes can be hazardous to public health, is that there are not many passengers who report these types of symptoms to their doctors, so there is very little anecdotal evidence.

In most cases, flight attendants are the ones who report their symptoms, and unless they file lawsuits, it is doubtful that the quality of air inside plane cabins will be as publicized as it needs to be to help protect passengers.

Energy efficient air filtration solutions  can help eliminate a significant amount of pollutants from airplane cabins. Most airliners are designed with HEPA filters to clean the air recirculated within the airplanes. Sometimes the filters are removed by the air carriers because moving air through the filters uses energy which costs the airlines additional fuel dollars. Most apply the filters properly for the protection of their customers and employees.

At Camfil, we have also developed products specifically designed to reduce the pollution generated in the airports. Our goal is to protect people in the airports and after they step into the airliner cabin.

Please visit our catalog to learn more about our air filters at airports and how they can help generate clean air solutions.